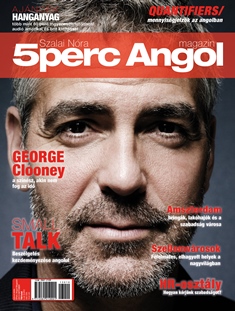 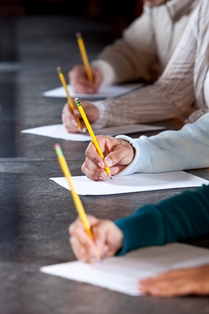 Read the text below and choose the correct word for each space.

The Leaning Tower of Pisa

The Leaning Tower of Pisa is a building in Pisa, Italy. It is a bell tower. The circular bell tower stands ……………….. Pisa’s cathedral. It is famous because ……………….. it leans to one side, and it looks like it might fall over.  ……………….. the years, the tower became a symbol of Italy and an important tourist attraction.

By 1990, the top floor leaned 17 feet (520 cm) to the south. Several attempts were made ……………….. the tower, but some of them made the situation even worse. A lot of restoration work has been done so far to stop it from falling over completely.

The height of the tower is about 55 metres from the ground. Its weight is about 14,500 tonnes. It now leans at about 3.99 degrees. The tower has 294 steps leading to 7 bells at the top. The outside of the tower is decorated with arches and columns.

The construction of the tower began in 1173. After the third floor was built in 1178, the tower started to lean, ……………….. having a small three-meter foundation in soft soil. The design of the tower was bad from the beginning. Shortly afterwards, constructions had to stop and didn’t continue until 1275 because Pisa was at war. Then the next three floors were built even with the ground to try to correct the lean. When they were finished, the tower leaned to the south. Finally, the last two floors were added in 1350.

During the long building delays, the tower’s weight compresses the ground under it, ………………..  strengthened its base enough to keep it from falling, ……………….. it still leaned a bit more each year.

The tower actually leans because it’s too heavy for the ground it is built on. The uneven layers of sand and clay beneath it have caused the tower to sink more in certain places.

In 1990, the Italian government closed the tower ……………….. the public and began a 10-year effort to stabilize the situation. A group of international experts tried different solutions, but nothing worked. Then, in 1999, a British engineering professor found a solution ……………….. the problem. The soil was removed slowly from the high side, so that the tower could ……………….. the ground. This proved to be successful and by 2001 the tower was 16 inches  (40 cm) straighter. The building is said to be safe for at least for another 300 years. The tower re-opened to the public in June 2001.

Read the text and answer the questions which follow the article in English. Only include information from the text. Give short answers, write full sentences only if necessary. In this part of the exam you can use your dictionary.

Millions of Americans watch what they eat. But one Las Vegas man has painfully discovered that where you eat can have a big impact on your health as well. In a story almost too bizarre to be true, a man suffered a heart attack after eating a "triple bypass burger" at the Heart Attack Grill in downtown Las Vegas, local affiliate Fox5 reports.

As comically tragic as that may sound, no one can sue the restaurant for not issuing fair warning. Its website proudly proclaims the menu offers, "Taste Worth Dying For!"

Still, it was the first actual known cardiac incident at the Heart Attack Grill. "He was having the sweats and shaking," Nurse Bridgett, who was working at the restaurant at the time of the incident, told Fox5. (Employees at the restaurant are given fake medical titles, including the establishment’s owner, Doctor Jon Basso.)

"I actually felt horrible for the gentleman because the tourists were taking photos of him as if it were some type of stunt. Even with our own morbid sense of humor, we would never pull a stunt like that," Bosso told Fox5. "He was sweating, suffering. Anyone with an ounce of compassion would’ve felt for him."

Basso said the man’s name is being kept private but that he is recovering from the heart attack. Of course, you can’t blame patrons for being caught up in the overwhelming sense of irony. Not only is the restaurant named the Heart Attack Grill, but its sign tells prospective diners that anyone "over 350 pounds eats free." There’s even a tongue-in-cheek warning sign at the restaurant’s door stating that the offered dining fare is a health risk.

Some of the menu items available for diners at the Heart Attack Grill include: The butterfat milkshake, non-filtered cigarettes, "flatliner" fries and four different burgers, each rated on an ascending scale of one bypass to the quadruple bypass burger.

1.     When and where did the man suffer a heart attack?
He suffered a heart attack after eating a "triple bypass burger" at the Heart Attack Grill in downtown Las Vegas.
2.     Was this the first incident at the eatery?
Yes, it was the first actual known cardiac incident at the Heart Attack Grill
3.     What were his symptoms?
He was sweating and suffering.
4.     What did the other guests and tourists think when the incident happened?
The tourists were taking photos of him as if it were some type of stunt.
5.     What kind of food is served there?
6.     Some of the menu items available for diners at the Heart Attack Grill include: The butterfat milkshake, non-filtered cigarettes, "flatliner" fries and four different burgers, each rated on an ascending scale of one bypass to the quadruple bypass burger.